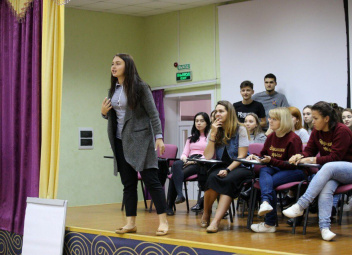 All participants were divided into two categories : "The First League" and "The Premier League".

Among the competitions' tests were: "Self presentation","Top-speaker ", "Pedagogical situations ", "Authoring game in the group", "The moment of glory", "The Intellectual tournament" and "The Candles".

The head of the Selet projects – Adip Almir visited the SEC "Fensar" in 22 of October .

"The competition – is not the counselor school, is not the work in the camp ,this is completely the new step for you. I Respect you, and I admire you. You are the ones who have overcome such a long way in Selet community. You are the highest teachers . Every one of you is the winner. Everyone is strong in his part, that is why we need to study from each other, to learn from experience of others. We can compete among ourselves ,but remember, that nobody can win us,because we are strong ,we are high-spirited!" – these Adip Almir's words were devoted to the participants.

An open conversation took place after the greeting ,where the head of Selet answered to all questions ,which were given by counselors.

"I was so active as you. In my opinion, leadership and the desire to know something new is given to person since his birthday: he use or lose it. I used it. I was the head of a line attachment, leading 40 people,when I was 20 years old. We were engaged in construction . I could not even predict that I would build my own youth organization. Now I am living in the atmosphere of Selet. In fact ,this is an essential part of our big future civilization .It is something integral, where new generation will be born. Each camp and every shift – is its history ,its soal(spirit) holders. With our presence we broaden the Selet civilization. I would like to be in the centre of people, who set directions", – shared his thoughts with us Adip Almir.

He managed to cheer up and inspire the participants before the finale thanks to his speech. The finale was attended by counselors, successfully passed qualifying stages. They had to pass the following competitive tests: "Self-Presentation in the Top-Speaker form", "Project Work", "Intellectual tour", " My detachment", and "Pedagogical Situations".