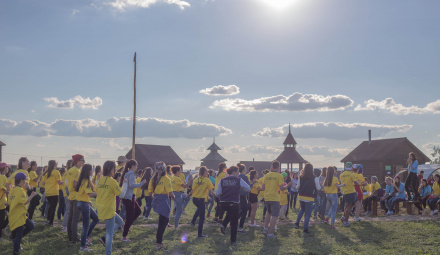 Since 2009 with the support of the CEO of JSC “Tattelekom” L.N. Shafigullin, “Selet” holds
the “Iske Kazan” Tatarstan Republic Festival of Talented Children and Youth. Its
participants are about 500 schoolchildren of grades five to eleven from all districts of the
Republic of Tatarstan. The unchangeable location of the Festival is the Iske-Kazansky
State Historical, Cultural and Natural Museum-Reserve in the Kamayevo village of the
Vysokogorsky district.
The Festival is held under the motto “Iske Kazan is the Tatars’ cradle”. Every year the
educational programme of the Festival includes meetings with famous historians,
scientists and workers of art and culture. Since 2014, a big creative festival of “Selet” KVN
teams is held within the “Iske Kazan” Festival. Furthermore, the “Crafts’ Fair” is located on
the territory of the Museam-Reserve.
The Festival is aimed at preserving the traditions and the history of the native land,
attracting the attention of the younger generation to their native language and the culture
of the Tatar people.